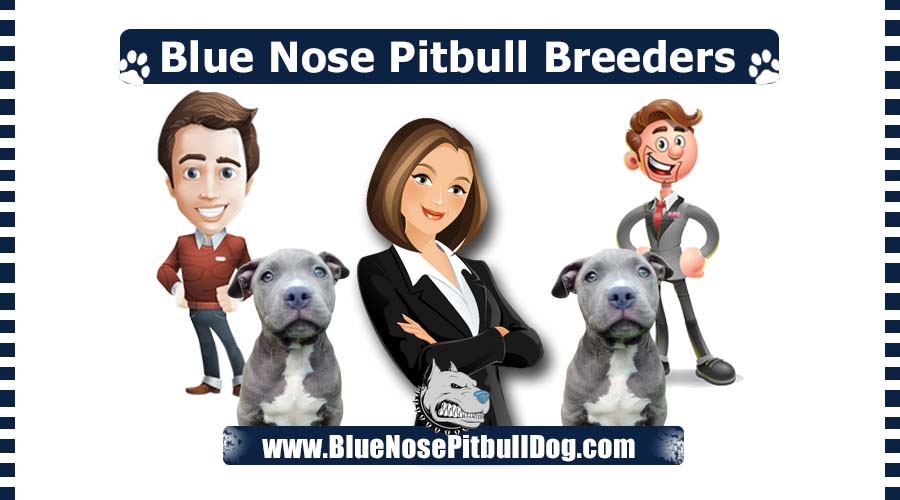 These are the best blue nose Pitbull breeders around the world. Some of them only ship to the US and Canada, while some of these breeders ship the puppies worldwide. Choosing a good breeder can save a lot of your money. Moreover, it also decreases the risk of many health conditions.

5 Best Breeders of a Blue Nose Pitbull around the Globe

If you want to get a blue nose Pitbull from them, you can contact them on their email address or phone number, as mentioned below. They ship these dogs all around the world. They charge around $550 for shipping anywhere in the United States. However, if you live in another country, they will charge $280-3500, depending upon the paperwork and regulations. They ship via airline, and you can receive your dog at your local airport’s cargo section. They place food and water in the crate, so dogs won’t have any problem while traveling.

It’s another good breeder that you can contact if you want to get a blue nose Pitbull. They provide a complete care guide along with the puppy, including pamphlets, health records, brochures, coupons, and the complete guide to take care of your puppy for the first year. A proper care can help increase the Pitbull’s lifespan.

They can deliver a blue nose Pitbull to any part of the world, except Australia, because Pitbulls are ban in Australia. Their shipping charges vary country to country. They charge $500-1500 for shipping in Canada and 50 different states. However, if you live anywhere in South America, UK, Asia, or Europe, they may charge $1500-3000 for the shipping. If you want to get a puppy or fully grown blue nose Pitbull dog from them, you can contact them on the following details.

You can get a blue nose Pitbull from this breeder as well. You can contact them, and they will pair you with the right puppy for your family. Their Pitbulls are one of the finest that grow up to XL and XXL. For the health and safety of Pitbull puppies, they do proper vaccination. Moreover, the puppy that you will get from them, will have paperwork from ABKC and UKC. They ship their dogs all across the United States and some other countries as well.

If you want to get a dog from them, you can contact them on the following details.

Empire bully is one of the finest breeders of a blue nose Pitbull; you can consider them as well. They breed XXL Pitbull Terriers and Pocket American Bullies to produce XXL blue nose Pitbull puppies. The dog that you will get from them will have a purple ribbon from UKC. A purple ribbon is given to those dogs, whose 14 ancestors within the dog’s three generations (parents, grandparents, and great grandparents) are registered with the UKC; they are all the same breed. A purple ribbon ensures the quality of a dog.

They also deliver puppies all over the world. Their dogs are very healthy and energetic. If you want one from them, you can contact on the following details.

They are breeding Pitbulls since 2005. Their Pitbulls are compact, muscular with blocky heads. They produce blue nose Pitbulls of various sizes, including pocket, standard, and XL. Their pits are bully style. They also provide two years health guarantee, proof of vaccination, health certificate from a licensed veterinarian, and UKC papers along with the dog.

You can get a blue nose Pitbull from them once it is eight weeks old. They deliver dogs to United States, Mexico, Canada, and Paris via airline. So can receive the dog from the nearest airport. They charge $600 for shipping throughout the US. However, if you live in Canada, Paris, or Mexico, they will charge more amount. If you live near upstate, their drivers can deliver a dog to your doorstep. If you live in one of these areas and are willing to get a puppy from them, you can contact them on the following details.