Blue Nose Pitbull Bite Force – Myths and Reality About it

There are many rumors about blue nose Pitbull bite force. Many people believe these dogs have an extremely strong bite. The reality is not always what you hear from the people. People believe in this rumor because of the aggressive and ugly history of this dog. Moreover, the athletic, strong body, big head, strong jaws, and good agility of blue nose Pitbull make people firm their belief on this rumor. Even some people believe that these dogs can shatter the cow’s femur with a single bite. If it’s not true, then what is? 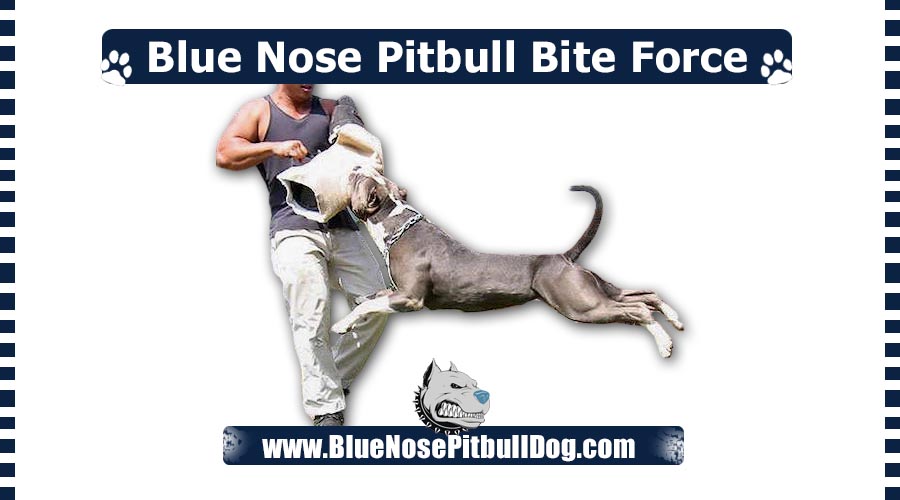 A blue nose Pitbull’s bite force is around 235 PSI (pounds per square inch.) It’s not that bad, you can count it as a good bite force in medium-sized dogs, but you can’t say these dogs have the strongest bite force. There are a lot more dogs that can bite more strongly than blue nose Pitbulls.

A Quick Comparison of Bite Force

For your understanding, let’s make a quick comparison of different dog breeds. Comparison will let you understand clearly the bite force of this dog.

How to Measure the Bite Force of Dogs?

Just like you measure the pressure of tires in pounds per square inch, similarly, a dog’s bite force is also measured in PSI. Digital meters are used to calculate the bite force of dogs. The amount of pressure a dog puts in closing its mouth determines the bite force of a dog.

Which Factors Affect the Bite Force of Dogs?

There are a lot of factors that affect the bite force of dogs. The following factors are the reasons that some dogs have powerful bite force while some can’t even make half of it.

The size is the biggest factor; bigger breeds have stronger bite forces as compared to smaller breeds. As blue nose Pitbulls don’t come in the big-sized dog category, that’s the one factor that they don’t have that strong bite force. They are medium-sized dogs, and they have a good bite force according to their size.

These are also the factors that play their role in bite force. The blue nose Pitbulls have big heads and jaw; that’s the reason they have good bite force in medium-sized category dogs.

Why do People Fear the Blue Nose Pitbull’s Bite Force?

Because 235 PSI is not that bad, even it is really good in medium-sized dogs. Also, the image of this dog is really aggressive and fearsome in people’s minds. Moreover, when these dogs bite something, they hold and shake with their big head. Though they are also really strong and muscular, combining their bite with shaking can cause big damage.

Moreover, they hold their bite for a very long time. Due to their strong jaw muscles, they have the capability to hold for a long time. They don’t easily release once they bite something. These are the reasons that people are scared of blue nose Pitbull’s bite.

Can a Blue Nose Pitbull’s Bite Break the Bones of People?

As mentioned earlier, they not only just bite and release the object. Once they bite, they hold it for a long time, and they also keep on shaking, causing big damage. If they bite a person, they will cause extreme damage to the bones and tissues. If they bite an older person or the kid, then there are many chances they may break their bones as well because the bones of kids and older people are not as strong as a young man.

Can a Blue Nose Pitbull Kill a Person?

If we look at the past, we can see a lot of deaths due to the attack of Pitbulls. The blue nose Pitbulls are also the Pitbulls, but with a blue nose, so mishaps can happen even with them. Keep in mind; these dogs are not that bad what people think about them. It’s all about the training you give to them in the developmental stages. In fact, blue nose Pitbulls are very loving dogs that love people and kids. However, a mishap can happen at any time. That’s why if this dog is not properly trained and it misbehaves, then something scary can happen.