Do Blue Nose Pitbulls Bark a Lot? Know the Possible Causes of Barking

Some dogs are quiet; some keep on barking all the time, but do blue nose Pitbulls bark a lot? You’ll be interested to know this answer if you are planning to get this dog in your home. In general, blue nose Pitbulls bark moderately. It means they don’t bark a lot without any solid reason. However, there can be various reasons that can make them bark more than the normal routine. In this article, we’ll discuss those reasons, so if your blue nose Pitbull is barking a lot, you can figure out the actual cause; some of the causes are good while some are bad. Moreover, if you want to choose a dog based on barking frequency, still, this article will be helpful for you in this manner. 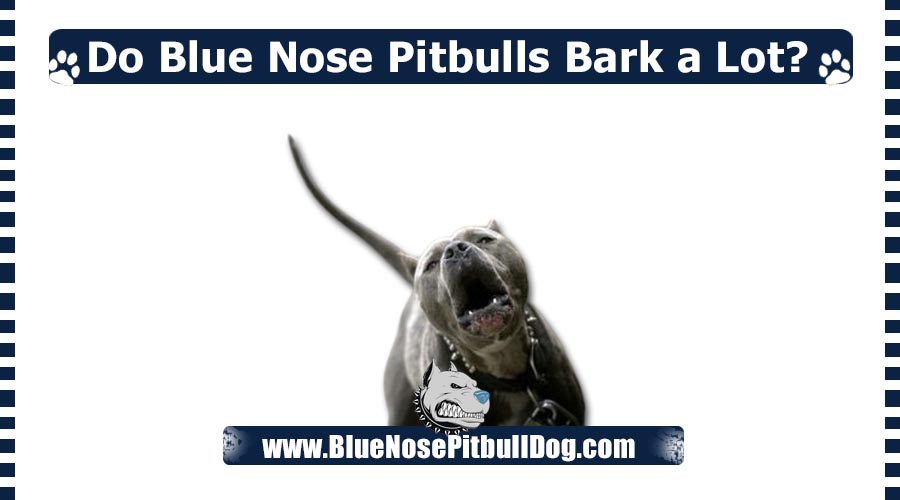 As mentioned earlier, blue nose Pitbulls do bark, but they bark moderately, unlike those dogs who keep on barking all the time without any reason. Why do they bark? Because they are dogs, they can’t talk. Barking is their only way of communication. If they are scared, nervous, excited, hungry, or want to show their love, they will express themselves with barking. In simple words, we can say these dogs will only bark when they want to express something. Depending upon the situation, barking can be high-pitched or low-pitched.

Causes that Can Make Blue Nose Pitbulls Bark A Lot

There can be various reasons that can make blue nose Pitbulls bark more than the normal routine. Those reasons are as follows.

When they are bored

If they have nothing to do and they are getting bored, they may bark. Sometimes they love to hear their own voice, so they bark to kill the boredom. If you leave them alone or don’t pay attention to them, they will get bored. They have a lot of energy; they need activities to utilize their energy, sitting idol may make them bored. So, in this case, spend time with your dog, play with it, involve it in exciting activities.

When they want to protect you

The blue nose Pitbulls are very loving dogs; they love their owner and the entire family. Though they are not good guard dogs still if they feel you are in danger, they will try to protect you, and they bark at the intruder.

When they are threatened

Just like other dogs, if your blue nose Pitbull finds itself threatened or in danger, it will use barking as its first defense tool.

The blue nose Pitbull may bark a lot in fear

If they are feared, they may start barking a lot. There can be various reasons making them scared. A loud sound of the horn or thunderstorm can make them really scared. Even they look very muscular, energetic, and brave dogs, but these types of loud noises or sounds are enough to scare them. Now you may wonder, how can such a brave dog be scared from loud noises or sounds? Because they are unfamiliar with those noises, they don’t understand what is it. They get panic and may run towards their owner and start barking a lot.

When they want to get your attention

Just like us, we can’t control ourselves in excitement; the same goes for the dogs. Even they can’t control expressing themselves. If your blue nose Pitbull is feeling excited, it may start barking happily. It can be due to many reasons. Either you are playing with your dog, throwing a ball, it will get you excited. If you have cooked your dog’s favorite food, it may get excited.