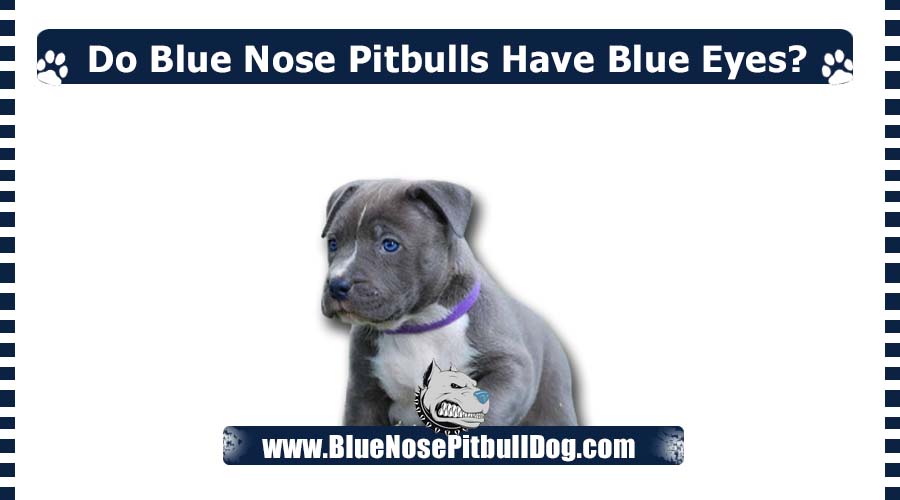 Let us tell you; blue eyes are not like the blue nose that will last forever. No doubt, you can get a blue nose Pitbull with blue eyes but only as a puppy. When they are born, they have naturally blue eyes, but once they grow up, that blue color in their eyes starts to disappear with time. Once the blue nose Pit becomes an adult, its eye becomes dark.

Why do the Blue Eyes of Blue Nose Pitbulls Disappear?

The color depends on the amount and type of melanin produced in dogs’ bodies. Just like humans, melanin also affects the skin, eyes, and hair color of dogs. Melanin is the pigment that determines whether the skin, hair, or eye color is dark or light. If less melanin is produced in the Pitbull’s body, it will make their eye color light blue. Similarly, greater production of melanin will lead to their dark eyes.

Melanin starts producing in the body just after few weeks of the dog’s birth. The amount of melanin increases with time. That’s why blue nose Pitbull puppies have light blue eyes, while the grown-up have dark eyes.

Should You Pay Extra Money for the Blue Eyes of the Blue Nose Pitbull?

Never pay the extra money, as it’s not something that is going to last for a dog’s lifetime. So, why pay extra for something that will disappear within two years. Even if a breeder tries to convince you that it’s a rare color, don’t believe him/her. The eye color of blue nose Pitbull is going to change anyway.

Can a Blue Nose Pitbull be a True Albino?

Remember, albinism can make coat color pure white and eye color blue, but this also makes them highly susceptible to UV radiation’s adverse effects. If your Pitbull is albino, protect its skin with a bodysuit.

Blue Nose Pitbull puppies can have blue eyes. However, once they grow up, their eyes color changes to black. That’s why never pay extra money for blue eyes, as it’s not going to last forever. If the Pitbull is albino, it can have blue eyes even in adulthood, but it will also have a pink nose rather than the blue one.